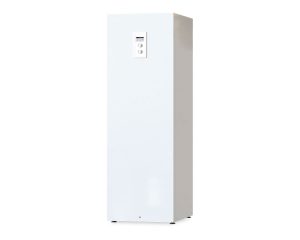 There are many reasons you might opt for an electric combi boiler installation. It may be that your home is not on the mains gas network. Alternatively, you may be tempted by the efficiency and environmental qualities of the electrical version. Another reason to look at an electric combi boiler is that they take up less room than an LPG or oil powered boiler, as you don’t need to install a tank to hold the fuel.

Whatever your reason for looking into this type of product, these electric combi boiler pros and cons will help you decide the best course of action.

A big reason given by many customers who opt for an electric in the electric or gas combi boiler debate is the environmental impact. When you go electric, you no longer burn gas in your home and release it into the atmosphere. Of course, electricity isn’t completely clean, but it is definitely cleaner than gas. Electric combi boiler efficiency rates are usually greater than for gas combi boilers, which also offers peace of mind that you are not wasting excess fuel when running your central heating.

A small electric combi boiler will fit easily into the space where a cupboard would usually be in your kitchen, which makes it both convenient and discreet too. There is also no need to install an LPG or oil tank into your grounds, once again proving its space-saving qualities. This is particularly handy if you do not have access to the mains gas, an issue for millions of UK homes. 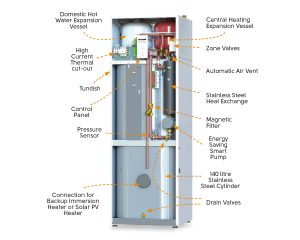 To give you a rough idea of electric combi boiler prices, a small 9kW model might cost you around £1,500. If you have a home that requires more power to heat all of the radiators and hot water, you could spend £2,500 for a bigger and more efficient machine. Electric combi boiler prices can head up towards the £4,500 mark for the real premium models. The build quality of these units means that they should last much longer than standard models, but it depends on how much you want to pay up front.

The electric combi boiler installation cost can depend on a number of factors. If you are changing a gas combi boiler for electric, you will need a gas expert to deal with the existing pipework and that will add to the combi electric boiler cost. Similarly, if you want to move the location of the boiler, that additional work will also be factored in. However, if you are swapping like for like in terms of boilers and in the same location, the job will be more straightforward and, therefore, less expensive.

Clever Energy Boilers performs free, no obligation home surveys to assess the work involved, which dictates the installation costs for an electric combi boiler. That way we can give you the cost before you decide to go ahead with the job.

Comet provides combi boilers in three different sizes; 9kW, 12kW and 14.4kW. They are relatively easy to install and come with in-built programmers, wireless thermostats and weather sensors. The boiler guarantee is two years, with a ten year guarantee for the in-built hot water cylinder.

Thermaflow boasts about the 100% efficiency rating of their electric combi boilers. You can find models featuring outputs of 9kW and 12kW,

The Mattira electric combi boiler range runs from 3kW to 12kW and features a system that helps it regulate consumption depending on the exact heating needs at the time. This means you don’t waste electricity by over-heating your property. The digital display means that they are easy to use and extremely accurate.

If you want more help with anything to do with electric combi boilers, don’t hesitate to call us at any time on 0330 055 2210. Our helpful staff will be able to find out any answers you need in order to help you choose whether to go for an electric or gas combi boiler.

Which is the Best Combi Boiler 2019

The Ultimate Guide To Buying A Boiler

The Most Popular combi Boiler that our customers love

Advice For Households During the Coronavirus Crisis
March 24, 2020

Get in touch with the team at Clever Energy Boilers…

Just send us some basic details and a little information about your enquiry.

We are here to help…

At Clever Energy Boilers we are all about providing a great service to our customers – you can call us 24/7 and we will answer your call!

You can find out more about which cookies we are using or switch them off in settings.

This website uses cookies so that we can provide you with the best user experience possible. Cookie information is stored in your browser and performs functions such as recognising you when you return to our website and helping our team to understand which sections of the website you find most interesting and useful.

Strictly Necessary Cookie should be enabled at all times so that we can save your preferences for cookie settings.

If you disable this cookie, we will not be able to save your preferences. This means that every time you visit this website you will need to enable or disable cookies again.